My Therapist Has a Wet Nose Mason Jar

Warm snuggles, little puppy kisses, and all the devotion in the world -- how can any human therapist measure up to all that? Think warm thoughts of your dog while enjoying cold drinks with this colorful mason jar inspired travel cup featuring durable acrylic double-walled insulation.

I ordered this Mason Jar for two reasons. One, I need a drinking glass for when I'm in the car driving. This fits the bill purrfectly! Made of a good quality plastic with easy to read graphics. Not a heavy vessel either. #just right! The second reason was the message. For me it honors my Trevor whom I adopted 8 August 2015 from the Humane Society. He was dumped there, and I am so glad he became my second cat (and he's thrilled because now that miserable first year of life he endured is but a faded cruel memory). Within a year of adoption, Trevor became my therapist (I have PTSD (which was exacerbated by the brute force abuse of power Westminster police). I will remember my fur doctor fondly every sip (with nice material drinking straw included) I take. 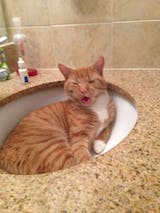